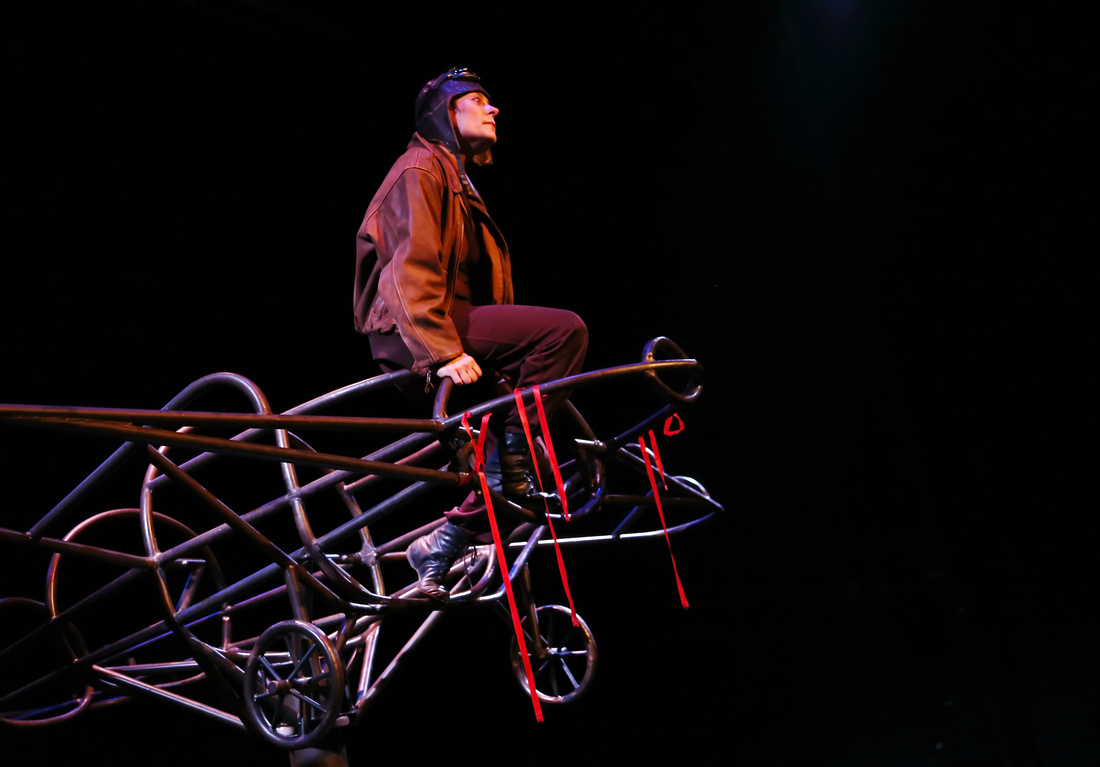 "It is my fondest wish to just fly and fly and fly, rather than pushing through always, trying to get to some other place instead of enjoying the place we'd already got to. Some day, some day, I hope to stay somewhere as long as I like." Mara Neimanis' original text makes me think about the disappearance of Amelia Earhart. I wonder if, in some way, she felt at peace, going down with her beloved plane, Electra. Maybe she didn't want to be found... 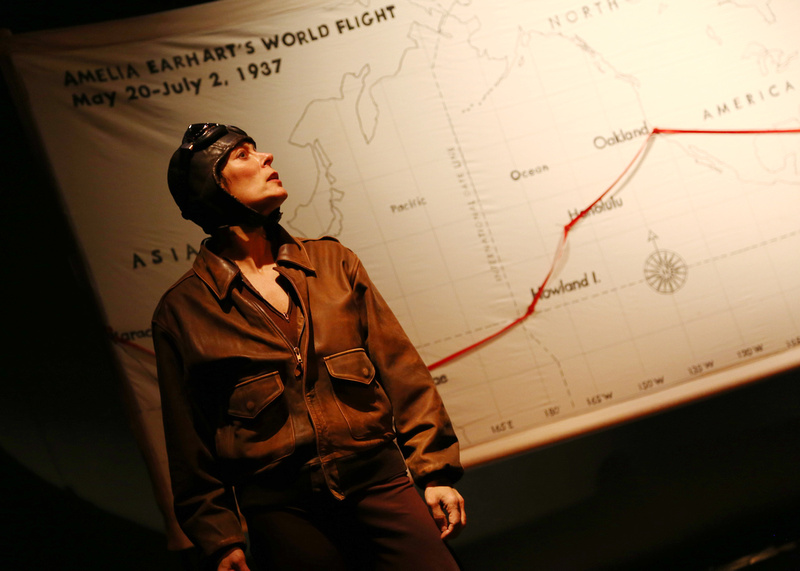 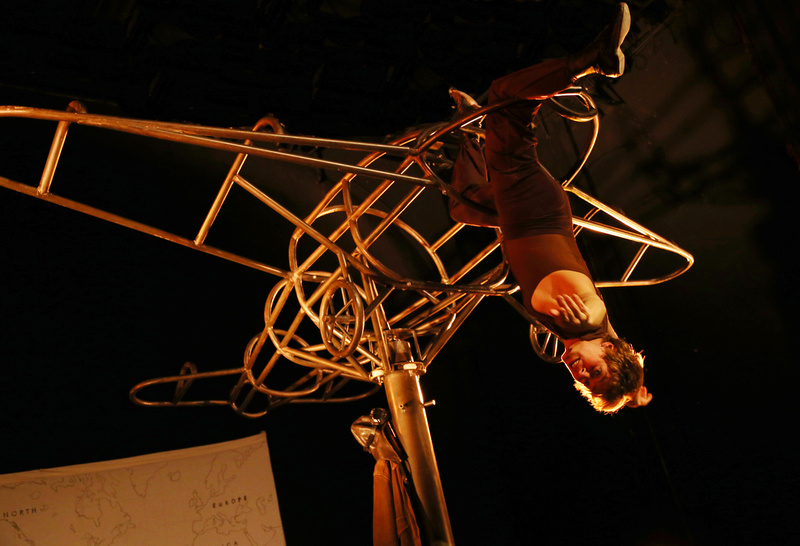 "Air Heart" is an aerial storytelling of the life, mystery, and final flight of Amelia Earhart, written and performed by Mara Neimanis and directed by Bryce Butler. For Neimanis, channeling this fierce female icon seems to come quite naturally. As does her navigation of the12-foot tall spinning metal plane structure that the piece is performed on. Created by Laura Shults and Tim Scofield, the plane takes on a life of its own, and allows Mara to take us up in the air with Amelia. 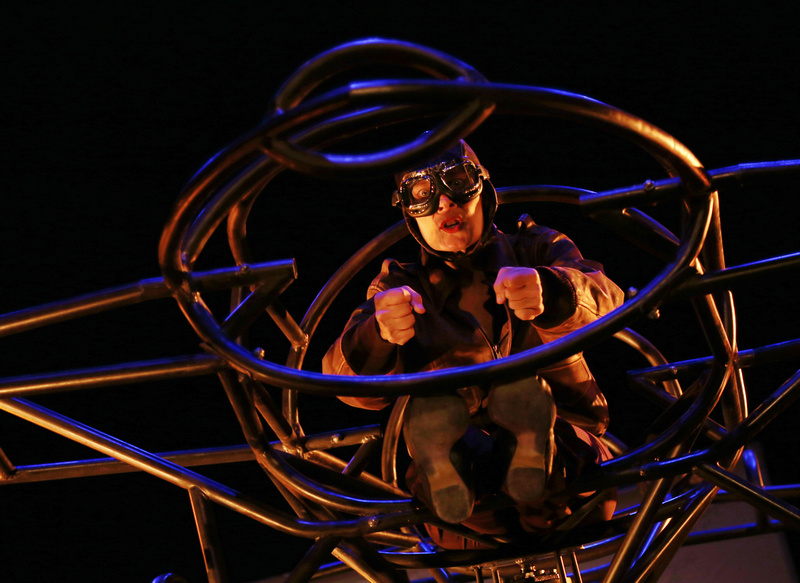 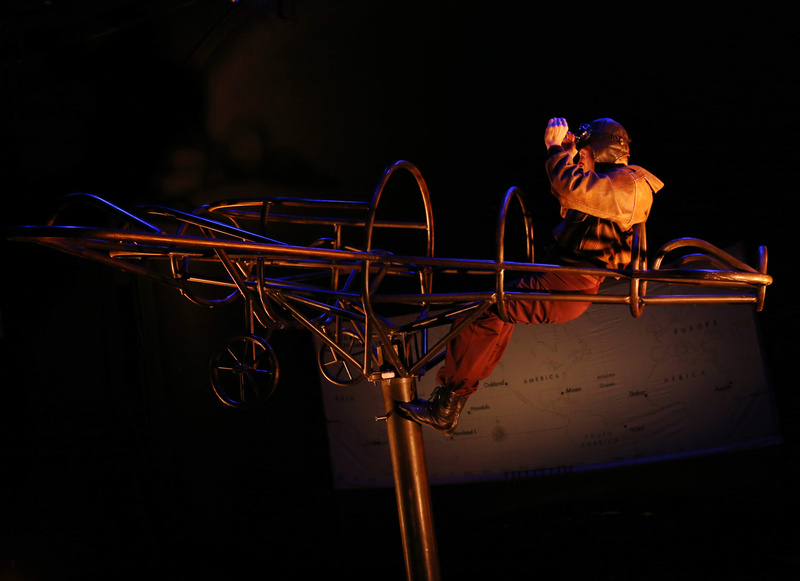 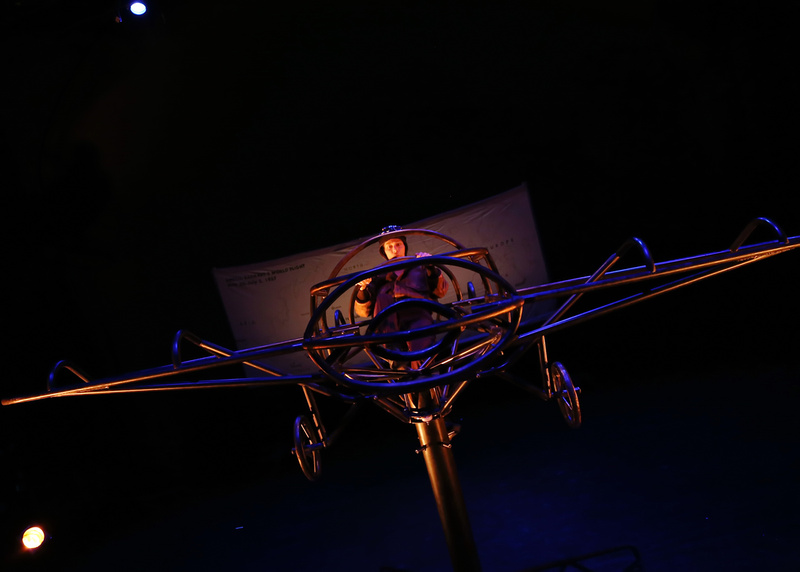 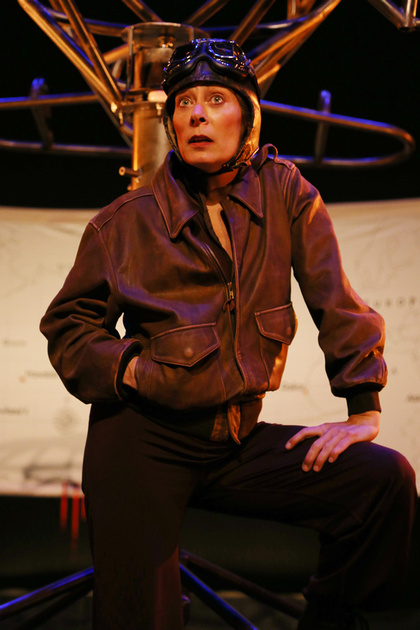 As a pioneer of aerial storytelling herself, Neimanis can relate to the drive for flight. And it is from this perspective that she intricately blends the factual dates, events, and quotes of Earhart's with the creation of her own voice for Amelia. The two seem as if they would have been good friends and share, "a sense of what it means to dream of flight and to become intimately driven by it." The fictional letters written between Earhart and Eleanor Roosevelt ring so true that you can't help but feel you understand some deeper part of this enigmatic woman. 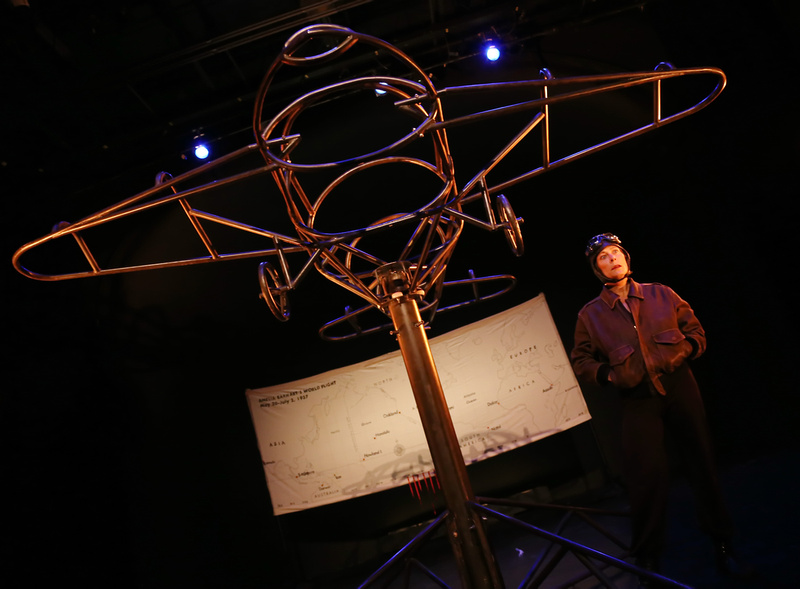 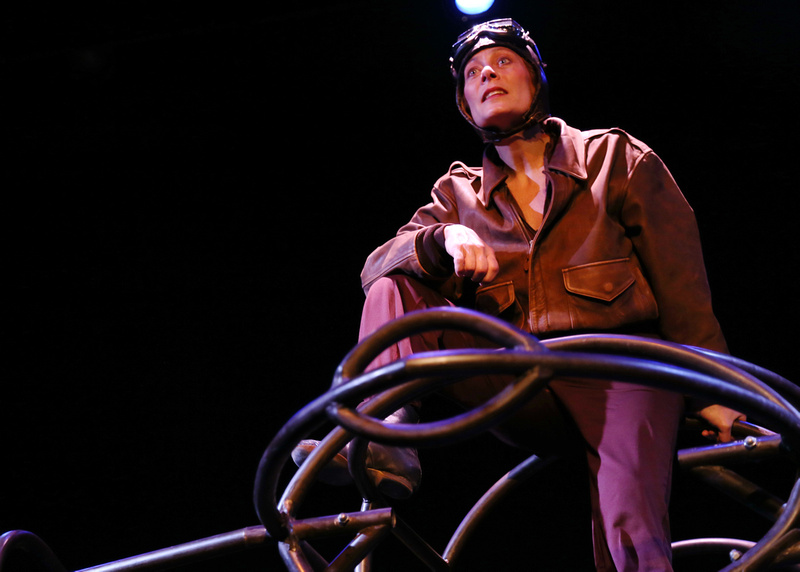 Suffering from dysentery and flying for an entire day in a cockpit with no toilet, restless nights in the hottest of climates, and then back up into the air. This sometimes went on for 21 days straight...this woman was no joke. I left my first viewing of "Air Heart" immediately wanting to know more about this courageous and ballsy individual. How relevant it feels to be witnessing the story of a woman who defied societal rules and championed a career in aviation, and to think she was doing this in the 1930's! 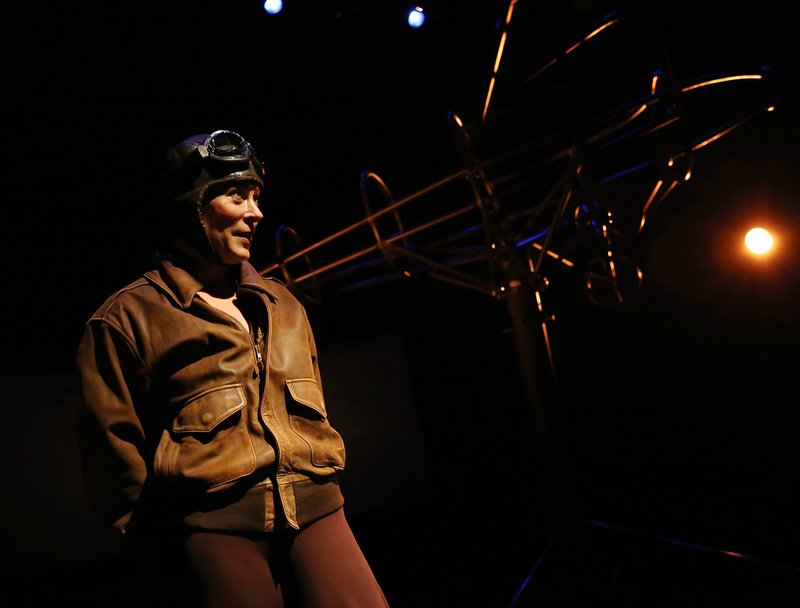 A crash in Honolulu took Earhart off course, but she soon continued on her quest. She stopped at nothing to achieve her goal of becoming the first female aviator to fly solo across the Atlantic Ocean. Often ignoring the advice of her expert navigator Fred Noonan, she flew on, driven by an unseen force. 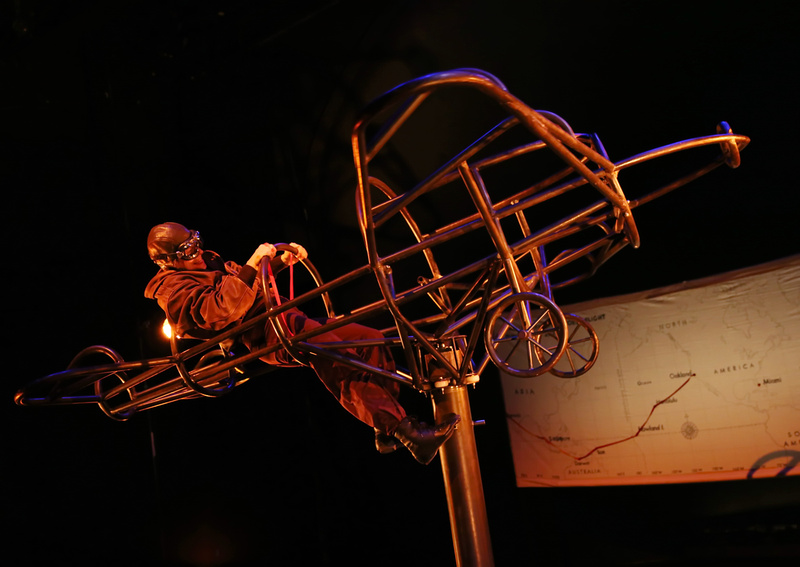 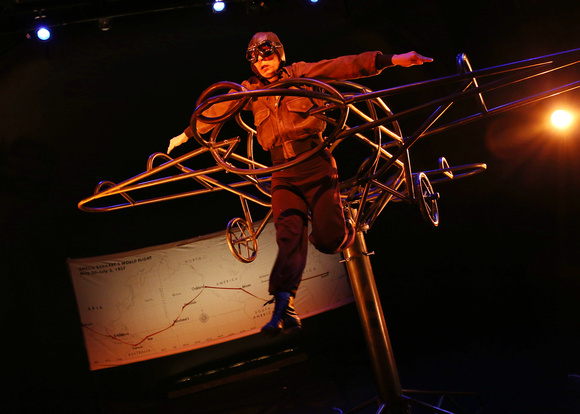 Neimanis takes us on Earhart's final, fateful flight three times, the haunting sounds of actual radio transmission echoing through the theater, "Calling Itasca, we must be on you now but cannot see you, gas is running low....we are flying at an altitude of 1000 feet. We are circling....we are circling." The tower could hear her, but she could not hear them. 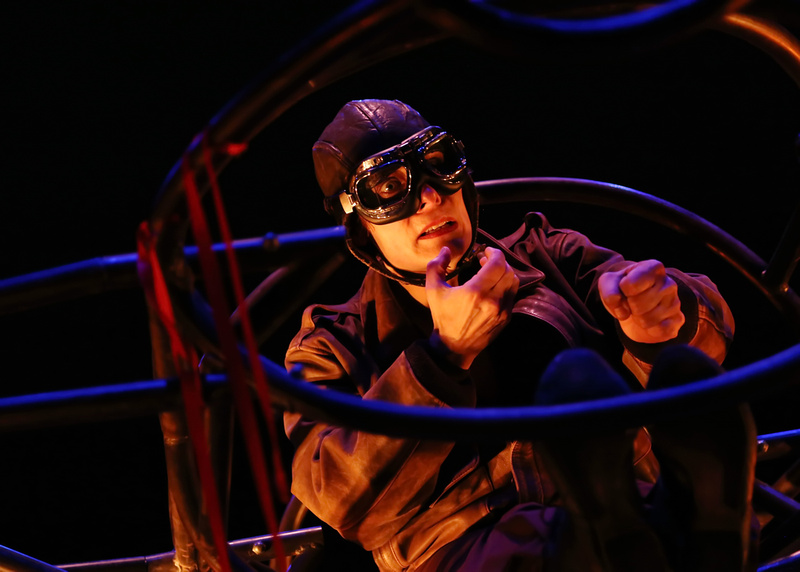 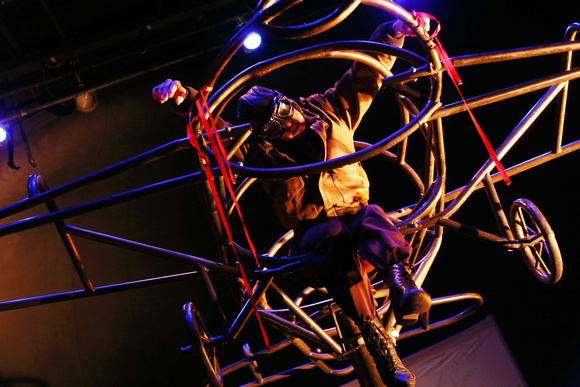 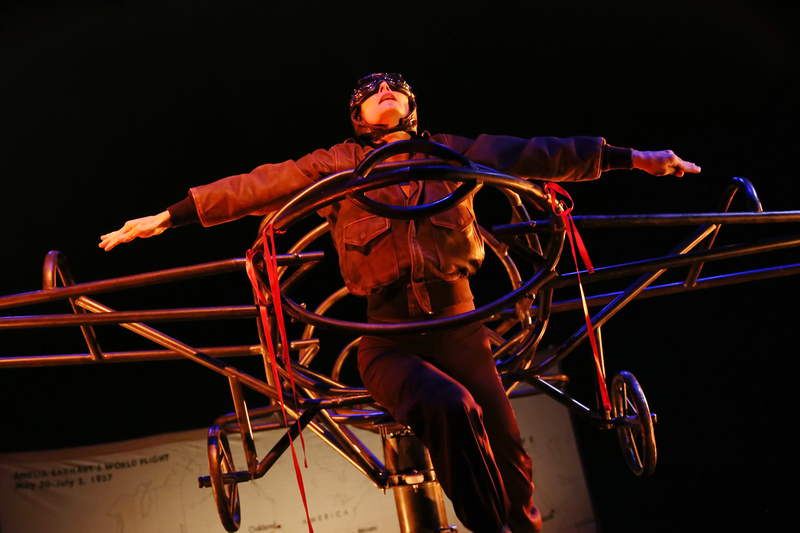 And the mystery lives on. Amelia and her plane have never been found. To this day, she remains one of the great enigmas of our time; and I think she would have liked it that way. This show has stolen my heart and brought me a closeness with a woman I would have quite loved to meet. 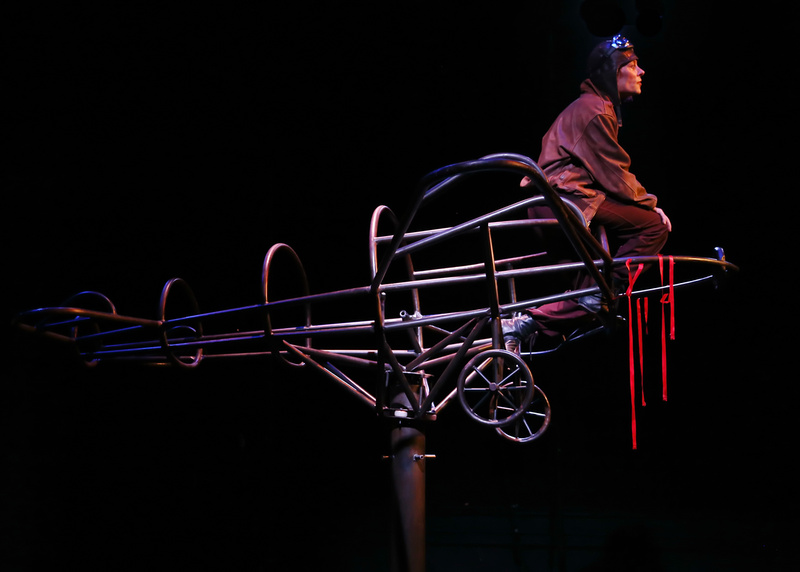 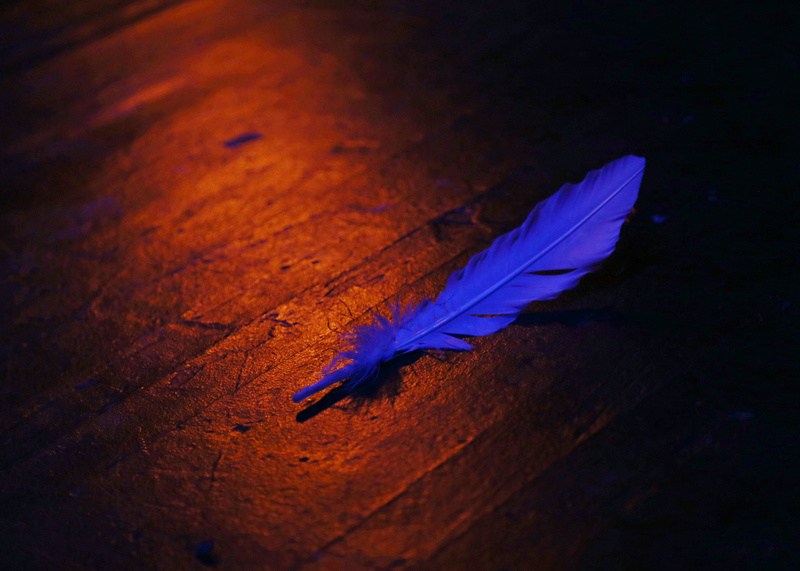 Bryce Butler(non-registered)
Dear Zonta Club,
You are mentioned in Mara's script twice as we're aware of AE's association. Please leave contact info. We'd love to come to New York. You can email me: [email protected]
Zonta Club of New Rochelle(non-registered)
We are proud to say that AE was a member of our organization Zonta CLub of NY- it was the only non aeronautical association she chose to join. Until today we have a fellowship that provides funds for women to pursue advanced studies in aeronautical engineering /planetary science named in her honor- The Amelia Earhart Fellowship . This peice would play well in NY, any plans of bringing the show to NY?
mara neimanis(non-registered)
Second Glance is not Second at all! They are first! First in talent, insight, generosity! As an artist who is pioneering something new, you serve always as some of my finest feedback. I learn more about my work through your lens, your response, what you feel to capture and the luck that happens too! I
am so grateful to have you in my performing work. You ARE in it. You help me create deeper and longer and help me understand my work more. Now that is AMAZING in this world today. Thank you First Glance, Second Glance and all the Glances in between!!! You fill my heart as I steel yours!
Bryce Butler(non-registered)
Thanks you two for such a beautiful combination of images and words. Your celebration of Mara and this show really gives us both heart.
No comments posted.
Loading...
Subscribe
RSS
Recent Posts
A Dream is a Wish Your Heart Makes Green Mountain Bliss at the Round Barn Farm Hard Bods, Soft Hearts at Basin Harbor Swans, Sunset & a Sports Car at The Middleburg Barn Springtime & Sneakers at The Old Angler Inn Beautifully Blended Family at The Elkridge Furnace Inn "I Do" Part One of Two Love Can't Wait Minimony at Trinity Episcopal Friday the 13th at Belvedere Hotel A Magical Mazel Tov at Adas Israel
Keywords
wedding baltimore wedding photographer fall summer engagement spring winter family photography travel baltimore
Archive
January February March April May June July August September October November December
© Photos By Kintz